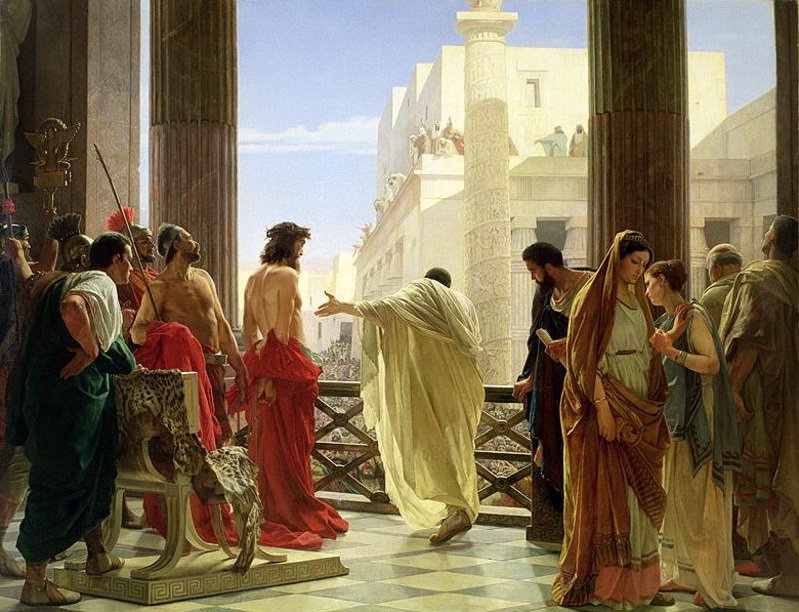 Early on the morning that Jesus was crucified, the religious leaders brought Him to the praetorium, the place where the Roman governor, Pilate, made his headquarters. The chief priests and Pharisees could not legally execute anyone on their own authority, so they tried to convince Pilate that this teacher, Jesus, would stir up trouble.

They were right, in a way. Jesus claimed to be God Himself, and that claim would turn the world upside down, whether the Pharisees liked it or not.

Pilate, who didn’t care about Jewish disputes, still took the time to question Jesus (John 18:28–40)—just to see if He would incite a rebellion.

Jesus told Pilate that He had come not to build an earthly kingdom, but to declare truth (vv. 36–37).

But Pilate dismissed Jesus with a question: “What is truth?” Apparently, he didn’t think Jesus could answer, and to keep the crowds happy, he sent God’s living Truth to be crucified.

Not everyone rejects God’s truth as bluntly as Pilate did, but the consequences of ignorance and rebellion are always the same. Without the light of God’s truth, we will live and die in the darkness of sin.

But thanks to God’s Word—that is, Scripture, the Bible—we can take the time to read what Christ taught about truth.

The Incarnation of Truth

John powerfully introduces Jesus as the Living Word of God (John 1:1–14). From before the beginning of time, Jesus was one with God the Father. He was the Word—in the Greek, the logos, the reason, the principal cause behind a perfect Creation.

Jesus was and is the first, preeminent being (Col. 1:18). He is dependent on no one and nothing else. All truth leads directly to Him. Because He loved us, He became flesh and lived among us, showing us His glory as only God’s Son could—full of grace and truth (John 1:14). He is the essence, the embodiment of God’s own truth.

The Path to Salvation

As the Holy Spirit testified through Peter in Acts 4, we cannot find salvation in anyone or anything else but Jesus Christ (vv. 8–12). We may start on different paths, but we all reach God through the truth of Christ.

So, what is truth? Jesus. And the truth of Jesus Christ is the only pathway to salvation. There will be some who won’t be able to handle this Truth, but by God’s grace and through the work of the Spirit, some will, and He will radically change their lives.